I arrived not long after 11. Went down the row of Buffy stars for autographs, and Julie Benz and Mark Metcalf were both there. Julie had a long line of people (twisting hack and forth,) but there were only a half-dozen people waiting for Mark.

Some of those guys ahead of me in the line were apparently from a video blog or small tv show, and they wanted to do two seperate interviews with him. I waited patiently, and got him to sign my Buffy RPG book when they were done. Then grabbed a slice of pizza and water, and brought it into Julie’s Q&A.

It was very cool having the VIP pass to get into the front rows of the Buffy fan Q&As. I remember thinking that the reserved seating wasn’t worth much for me, when I was considering getting the VIP upgrade, but it was definitely much appreciated. The MC was a guy from this Stan Lee superhero reality show – he was also there at Nicholas’ Q&A and the costume contests, and was very funny. 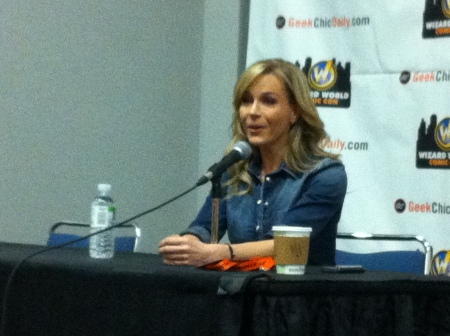 Back to Julie’s Q&A. I asked a question about what she thought when she was first auditioning, and she had a funny story about how her role had grown, how she’d been just ‘vampire girl #2’ in the original presentation, and then her role had grown until she had a name, and she got to survive the series premiere… and then she died in her next appearance, appeared in a flashback, got brought back to life, then got killed, then got brought back as a vampire, then staked herself, then appeared in a vision, then appeared in a flashback again. She mentioned how when she staked herself, nobody at ‘Angel’ really wanted to say goodbye because they knew she’d be back.

After the Julie Q&A was the Buffy photo ops portion of my day – I went for a Julie photo first, then waited around with the Toronto Buffy Fan club crew until we got our big group pictures with all five buffyfest stars. There were enough of us that the fans had to be split up into two groups, so I was in the ‘costumes’ group because I’d dressed up in my Simon Tam outfit.

After that I waited in line for a little longer with other people waiting to get individual photos taken with Nicholas, Mark, Claire, and Mercedes – most of them were also Buffyfest VIP pass holders. I signed up for a photo op with Aaron Douglas, and hurried off to line up for the Nicholas Brendon Q&A – I was further back in line, but the back of the room wasn’t full, and I got a good seat in the VIP section.

Nicholas was hilarious, and off-color, and talked about how well he thought he and James Marsters worked together. 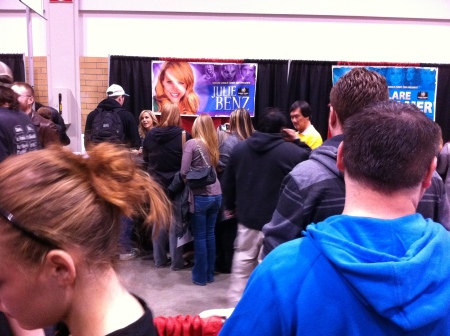 After Nicholas’ Q&A, it was time to brave the Julie Benz autograph line, which was still quite long, overflowing the twisty line area that they’d set up and spilling over into a walking aisle. In fact, soon after I joined the line, there were soon convention volunteers trying to stop new people from joining the line, because they didn’t want the line to take up any more room. Eventually they had one of their own people at the end of the line telling people to try coming back in ten minutes.

It took over half an hour to get through the line, so I got Julie’s signature in my Angel comic, and told her how I started watching Roswell because of her and became a big fan. Then it was over to the concessions for another slice of pizza before my photo op appointment with Aaron. The line for pizza was rather long, and I ended up racing to finish my slice so that I wouldn’t need to carry it in line, put it down inside the photo op booth, etcetera. That was probably a good idea, because the photo op line wasn’t long – I was the last.

Things finally calmed down somewhat about that point. I went upstairs to arrive late for a Q&A panel with a comic book guy, which was interesting stuff, and somewhat relevant for my Script Frenzy plans. Then downstairs again – I ate some of the food that I’d brought in, sitting out in the corridor outside the main convention floor, then came in and hung out at the Browncoats table, checking a few times to see if my Aaron photo had come in. (I’d picked up all the other photos when I got the Aaron photo taken.) Didn’t see it, and then it was time to go over and wait in line for the kid’s costume contest.

The costume contests were awesome. I took plenty of photo and video, both on the Fujifilm camera, (which finally ran out of battery juice,) and the iphone, (which ran out of storage space, and I managed to somehow delete a TV movie that I didn’t really want to watch.) The best in show was an Iron Man outfit that they actually took out of the box and put on on stage, though it did take a few minutes. (They’d come with a Whiplash, and had some fun with that, with the whiplash saying how he’d seriously fight Iron Man, but was willing to wait until he was ready.) 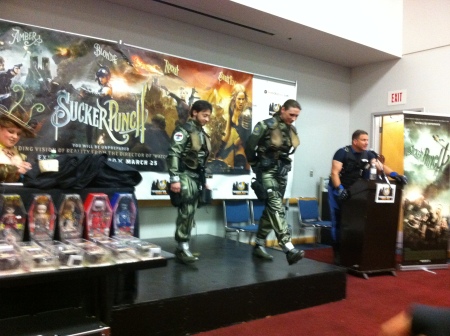 That’s about it, I should be getting to bed now.

This entry was posted on Saturday, March 26th, 2011 at 10:57 pm and is filed under Fan conventions. You can follow any responses to this entry through the RSS 2.0 feed. You can leave a response, or trackback from your own site.

One Response to My Wizard World diary, day Two