I have two different netbook computers. The first one is the eeePC, which was one of the first netbooks to hit the market, and I got it around April of 2008, just as the model was getting started. It’s a wee little thing with a 7 inch screen and 4 gigabytes of onboard flash memory, which is the same size hard drive as the Compaq laptop I bought way back in 1999, and it came with this strange mutant version of Xandros linux pre-loaded, which really made it a bit hard to do anything but what the people who loaded it thought you’d want to be doing with a netbook, which apparently included using it in coffee-shops with free wi-fi a lot, since many of the applications they had loaded were ones that worked online. 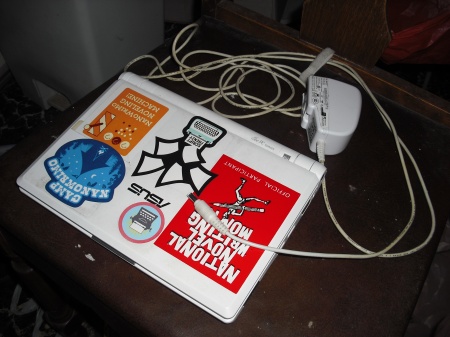 Myself, though I’ve found netbooks handy in coffee shops, I mostly wanted the eeePC to be able to use it on the go, since I commute so much on the bus. I ended up trying a few variants of the Xandros and then replacing it with various versions of Xubuntu linux, which is easy to use and to add new programs to, though it still can’t do a few things that Windows can do. The battery life on the EEE PC was never very good and it’s starting to get worse, so maybe I’ll have to look up one of those high-capacity batteries that are available on sale. But I love it for being so compact, and for the solid-state, so that I don’t need to worry about a hard drive crashing because the bus shakes once too often.

I’ve gradually increased the capacity on the SDHC expansion card I use with the eeePC – right now, it’s sixteen gigabytes, four times the size of the onboard solid-state drive, and most of that is put to good use with mediawiki databases under a program called wikiTaxi, which is actually windows software, but runs well under a system called ‘wine’ that lets you run a lot of simple windows programs under linux. Having extracts of wikipedia and wiktionary can be great alternatives to an internet connection when you need to do a quick bit of research for a story.

The other netbook, the Acer Aspire one, is a lot more like any other computer I’ve used recently – it runs windows XP, (I still haven’t taken the plunge for Vista or Win7,) and has a hard drive well over 100 gigabytes – more than the larger toshiba notebook that I do a lot of my work on at home. (In fact, in terms of specs, the only places the toshiba comes out ahead are probably the screen and keyboard size, and some of the other hardware and connectors that the Aspire doesn’t have at all.)

It has hours and hours of battery life, but I’ve had to send it in to get repaired after using it on the bus one morning, so I’m always a little nervous about bringing it in to work just for the sake of it. It’s become my go-to machine for coffeeshop writing sessions, though – unless I’m using the Alphasmart Dana instead, which has a better keyboard and fewer distractions. But I can’t use the Dana for editing really, or for script writing.

That picture of the Aspire, along with my glasses and my lucky Script Frenzy pen, was actually one that I took last summer in order to make a little signature icon to promote this blog, because it seemed to sum me up and what I was trying to talk about here. Here’s the icon:

This entry was posted on Saturday, April 16th, 2011 at 8:09 pm and is filed under Off-topic. You can follow any responses to this entry through the RSS 2.0 feed. You can leave a response, or trackback from your own site.