I’ve told you about some of my other writing writing devices during the A-Z challenge, but I don’t think that I’ve ever mentioned my Alphasmart Dana portable word processor on this blog yet, other than just casually in passing. 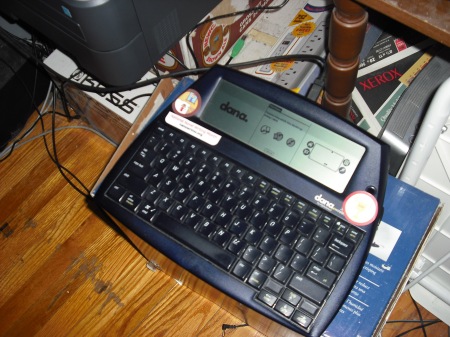 So, let’s see. The Dana has a big, comfortable keyboard, about the same size as that of a wide-screen laptop, built into a molded plastic case. The screen is monochrome LCD, a little bigger than two inches high by seven wide, with a backlight option to make it glow faintly, which is useful under dim lighting.

It’s about as light as the lightest netbook computers, though possibly not as easy to carry around, because the keyboard is wider. That depends on what you’re trying to carry it in, though. Dana has some good word processing software, built on the Palm operating system version 4, and specially designed to take advantage of a wider screen than any other palmpilot device. You can send your writing back and forth between the Dana and another device using a USB cable and Palm hotsync manager, over the wireless, or on little Secure Digital flash memory cards. You can also print directly to some printers over wireless or USB, or have it retype your work into any windows program by pretending to be a USB keyboard that somebody is typing on really really quickly.

The Dana is a design that’s been around for a lot of years at this point, and some things have unfortunately passed it by. The wireless isn’t as useful as it could be, partly because the Dana’s processor isn’t really enough to run much of a web browser, and also because it can’t be upgraded to modern wi-fi security standards – it can input a WEP passkey, but WEP has been cracked and isn’t much more secure than an open wi-fi hotspot, (which the Dana can also use just fine.) However, I wouldn’t be able to use it with my iPhone hotspot tether, because that automatically uses a WPA2 password.

Also, the hotsync drivers for Dana aren’t really available with windows 64-bit operating systems, which may become more of an issue, but still – I don’t plan on getting rid of my Dana while I can still do anything at all with the words I’ve punched into it. It’s a good minimal-distraction tool for writing; yeah, there are a few games and books loaded up onto my Dana, but I’ve gotten a surprising amount written on it over the years, and I’ve had fun making my own little word count utilities for it.

The act of writing, for me, has always been about my fingers on the keyboard, and the Dana keyboard is the best I’ve found when it comes to striking a balance between a big comfortable keyboard to use, and one that can actually be taken with me to write in different places.

I tend to abandon my Dana in a drawer for a few months each spring, as I tackle editing projects in March and then script writing in April, neither of which are tasks to which it is very well suited. Last week I brought it back out of the drawer, charged the battery back up, restored the last backup of main memory, and I’m going to be taking it with me to work tomorrow, probably working on a fandom crossover project. I can’t wait.

This entry was posted on Monday, May 2nd, 2011 at 10:23 pm and is filed under Electronics. You can follow any responses to this entry through the RSS 2.0 feed. You can leave a response, or trackback from your own site.

5 Responses to Dana by Alphasmart