I don’t actually remember where I got this Targus keyboard, if I ordered it online or found it in a shop like Futureshop. It’s a bit of an ungainly thing when it’s all set up, though it looks compact and elegant while folded away – the keyboard itself is in two segments, and then there’s a third piece that’s used to prop up a palm-pilot or pocketPC, with a wireless arm that you put over the IR transceiver for the PDA. This arm works well for my Palm tungstens, but keeps me from even trying the keyboard with the hp iPaq pda, because its IR transceiver spot is in the bottom, which is great if you’ve got a keyboard that’s built that way, but anyway. 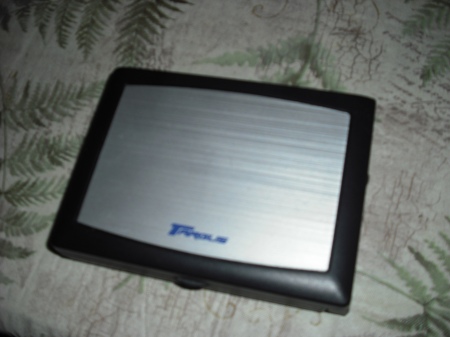 The basic keyboard setup works out well. The standard typewriter keys go into whatever application is running at the time, and there are some hard-coded function keys down the right side that allow you to switch into particular applications. The keyboard driver also lets you map the combination of ALT and a number key from 0 to 9 into a different application or special command, which is useful. There are a few missing bits, like no ability to set up a command key for ‘start the menu’ or a modifier to let you use palm menu shortcut keys, and no arrow keys to let you navigate through a document.

But what’s genius is that this keyboard driver gives you a mouse pointer – on some operating systems at least, such as palm v4.0. There’s an eight-way ‘rocker control’ in the bottom right side of the keyboard, and whichever way you rock the control, the mouse pointer moves that way, and when you click a little keyboard button next to the eight-way rocker, the mouse pointer ‘taps’ at its current location. It’s surprisingly intuitive and lets you do just about anything that you could do with an actual stylus, which is nearly anything that you can’t do by typing on the other keys.

The one problem I’ve noticed with this unit actually has to do with the way it unfolds – there’s a gear in one of the joints, and it’s not terribly happy anymore, so that sometimes it’s a bit hard to fold or unfold the board. But I still pick it up for occasions when portability is paramount, and I wish that devices like the Alphasmart Dana could incorporate that ‘mouse control’ feature.

This entry was posted on Sunday, July 3rd, 2011 at 5:01 pm and is filed under Electronics. You can follow any responses to this entry through the RSS 2.0 feed. You can leave a response, or trackback from your own site.