Time is running out for our little series of spotlights, but the end isn’t here yet! Today, my guest is Kurt Hartwig, from Everyday Performance.

Who is the most important person in your life?
Has to be my wife Lisa. We both freelance, and on a day to day basis we have to figure out who’s doing what, when, and for how long. She’s a documentary filmmaker and works in TV, film, and commercials (currently a Nikon spot). We overlap in our interests without being an exact fit, which minimizes any frictions that creep up. She’s unrelentingly honest in her criticism of my work, whether it’s “that’s great,” “it was a little confusing,” or “I got bored.”

Those are all quotes.

Do you smoke tobacco? Have you ever??
I do not and I have. I began smoking my sophomore year of college when I was studying in Seville, Spain. I never made it past a half a pack a day, trailed off and I smoked on and off socially for six years. At a certain point, everything about it made me feel a little gross, and eventually I stopped altogether until about 5 years later after a very stressful couple of months. I had one cigarette with two Australian friends. It wasn’t as good as I remembered and I haven’t smoked since.

What is your biggest fear when it comes to writing?
Not being able to keep writing with any serious continuity. Right now I work when work arises (3 months fixing a house this summer, for example, or art directing a commercial), and otherwise I get to keep pushing at the manuscripts and screenplays. So far we’ve been able to make the finances work out, but it’s a constant concern that the situation Lisa and I have arranged for ourselves won’t last or isn’t sustainable. 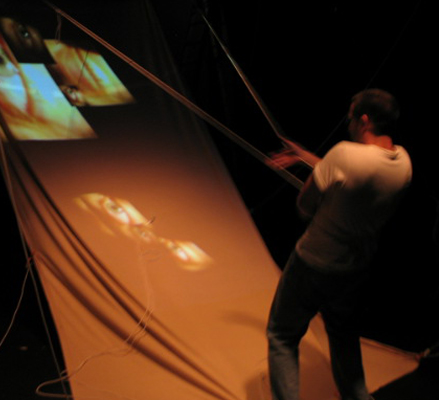 The photo is from a dance/theater piece I wrote and co-performed, CAT’S CRADLE. My partner (not seen) is the choreographer and responsible for the projections. I did the fabric puppetry and text.

I haven’t done any blogfests before, but thanks to Rachael I’ve also joined the Rule of 3 (#ren3) and MonsterFest. I’m working in different fairy tale veins for my four installments for #ren3 and trying to put my Folklore degree to good use writing about monsters (ouroboros and sphinx) for Sommer Leigh.

Otherwise I write about craft (structure, mostly), the odd review, or about What’s Going On.  It’s eclectic, but only because I haven’t found my way yet.

This entry was posted on Thursday, October 20th, 2011 at 6:55 pm and is filed under Crusader/Campaign. You can follow any responses to this entry through the RSS 2.0 feed. You can leave a response, or trackback from your own site.