February is Drawing to a close…

But I’ve still got nearly a week to draw my heart out! 😉

Earlier in the week, I was continuing with observational sketches using the plastic picture plane. I showed you a photograph last time of the picture plane with my hand holding a flash drive. Here’s the final sketch result. My fingers didn’t come out perfect, but I think I’m showing some progress: 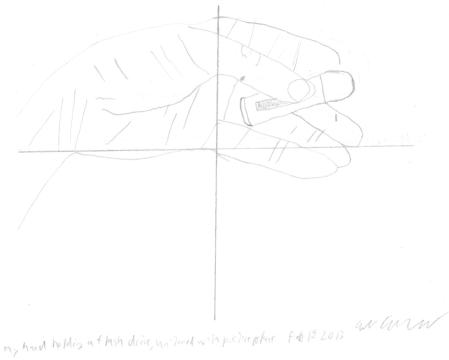 Next, I did a still life of an apple with the picture plane, and I went back to toning my drawing paper with the charcoal stick: 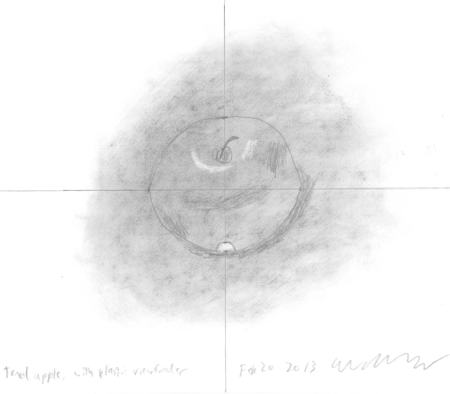 I’m not sure about the shading, but I like the proportions of the apple and the detail. (I cheated a little bit and put the picture plane over the paper I was drawing on at times, which really just encouraged me that I was doing pretty well with the edges and distances.) And I like that little hint of the white label on the apple at the bottom. 🙂

I took Thursday off, and did a bunch of reading from the book yesterday, moving into a new chapter talking about negative space – the shape of what isn’t there in the drawing, which isn’t really a concept that I had much trouble with. Betty says that focusing on negative space rather than the edges of the object you’re drawing can be a really great way to turn off the left brain mode, because it likes to focus on things that it understands, and it doesn’t really understand paying attention to things that aren’t there.

The first exercise in the textbook was drawing the negative spaces around and inside a chair from life, so today I ran around finding a good chair and a nice plain background to put it against, because having something else showing up in the ‘negative spaces’ seemed like it would be distracting. This meant moving out of my living room – not many plain backgrounds there, so I got everything set up in my bedroom, with the little plastic collapsible table to draw on, the closet door closed for my background, and I decided to use the workbook to draw in this time instead of plain typing paper. So I look through the workbook–and find out that there’s a few more exercises in there between the fruit still-life and the chair still-life! That happens a lot, but I wasn’t expecting it this time; the workbook has more exercises than the textbook, and a lot of them have proven useful.

So I picked one that looked promising – still drawing the negative spaces around and inside a chair, but this time you’re supposed to work from an existing photograph of a chair. I found one on Google Image search; and I think I’ll wait to show you the image I Googled and the resulting sketch early next week. 😉

This entry was posted on Saturday, February 23rd, 2013 at 5:23 pm and is filed under Visual arts. You can follow any responses to this entry through the RSS 2.0 feed. You can leave a response, or trackback from your own site.

One Response to February is Drawing to a close…