Okay, it’s been a while since I did a drawing post, which is good, because it means I’ve got a lotta pictures to show you. All of these were ‘negative space drawings’ – a technique where you focus on the empty space around the object that’s actually there – because the logical left side of your brain is bored by empty space and doesn’t know what mental category to bucket it into, so it bugs out and lets the right side draw what it sees – or so the theory goes.

After a little back and forth, I started with an exercise where you draw a chair based on a photograph. The workbook suggested cutting one out of a magazine or newspaper – I used Google Image Search and decided to work with this:

And here’s my negative space version. I toned most of the page with a graphite stick before I started drawing and erased everything but the ‘negative space’ when I was done.

The next exercise I tried was a ‘household object.’ I wanted something small, and ended up with a pair of scissors…

Not my best. I’m not sure if toning the background could have saved this.

The next one was an interesting idea – doing a negative space outline of a person in a ‘sports photograph.’ Once again, instead of cutting from a newspaper or a magazine, I printed something from Google Images: 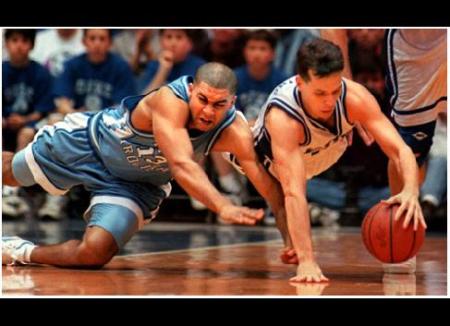 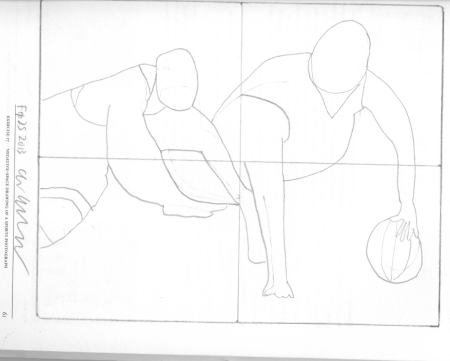 Some room for improvement, but I think I like it! 🙂

And the last exercise I did in my February drawing month was the negative space chair still-life: like the first chair exercise, except drawing a real chair in my apartment. I got an IKEA chair set up against the closed door of my bedroom closet, arranged another chair and a collapsible table in front of the bed, and created this:

What do you think?

This entry was posted on Monday, March 4th, 2013 at 9:15 pm and is filed under Visual arts. You can follow any responses to this entry through the RSS 2.0 feed. You can leave a response, or trackback from your own site.