So, I’ve been working for a while at the Storywonk Making Magic class. It’s taken me a little while to get into the magic groove, actually, (odd since I’m such a fantasy fan,) but there’s some great stuff in the course. I totally recommend it, especially for the encouraging tips Lani has about different ways to go out and hunt your magic; activities to help you get in touch with your muse, and sort out the inspiration you need for this particular book.

The first big exercise was the soundtrack. I love using music to fuel my inspiration, and Lani had some good tips for how to pick a good soundtrack, and avoiding the dangers of using something with too many memories that don’t really fit the book. On the other hand, I found I had some problems with her approach of going out and finding brand new music, because it takes me too long to figure out how I feel about a new song. So for my ‘Alien Love on a Kitchen Scale’ soundtrack, I ended up going through the ‘mid-tier’ of my music collection, considering a bunch of songs that I kinda liked but hadn’t rated with high numbers of stars. A few B-list songs snuck in there, mostly because I couldn’t shake the fact that they’d shown me something important about my characters, and I had to work for a few days cutting the list down to a length that seemed reasonable. Here’s the final soundtrack, more or less in the order of priority I was using to axe the last few stragglers:

Incidentally, Lani also had a tip about having the soundtrack available in every place and every format possible. Now, this is kind of a challenge for a gadget collector, (like Back Up Your Nano day,) and I ended up transferring the soundtrack to 14 devices and playback formats: two smartphones, the little flash drive I use to plug into the car stereo’s USB port, my Kindle, an SD card for the palm TX PDA, the Nexus 7 tablet, four MP3 players, a burned CD, and three computers.

That was mostly back in December. The most interesting and powerful magic stuff I’ve been doing the past two weeks has been casting and collage. Where the soundtracks are auditory, this is mostly visual; picking actors and actresses to represent your characters in your mind, and then putting them, with other bits of inspiration and things you know about the book, together in the same space.

I had an interesting twist to my casting, in that two of my major characters are Librans, an alien species not like anything else I’ve seen in the movies or TV. So I picked characters I was familiar with who had a good emotional feel for Doomah and Xem Amarin, even if they don’t look like Librans–or much like each other.

So here’s the finished digital collage. In addition to the cast pics for eight main characters, I managed to fit in a lot of a map I drew myself, and over a dozen other little graphics that have some meaning to me: 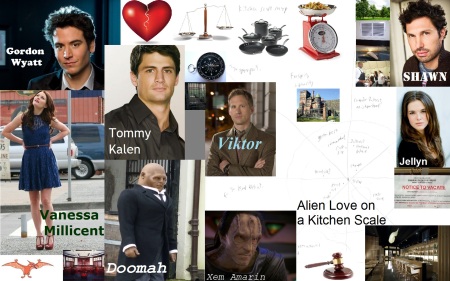 Do you have any tricks for generating magic and getting inspired to write?

This entry was posted on Tuesday, January 14th, 2014 at 9:52 pm and is filed under Visual arts. You can follow any responses to this entry through the RSS 2.0 feed. You can leave a response, or trackback from your own site.

One Response to Generating creative magic