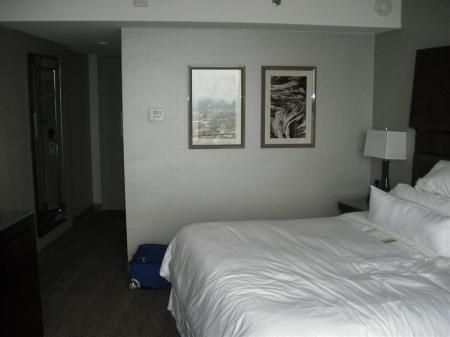 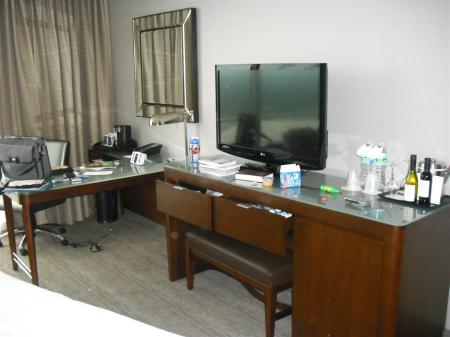 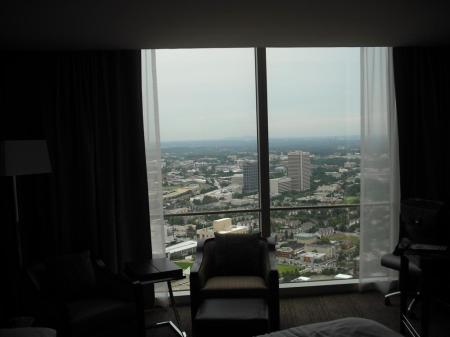 The Peachtree Westin Plaza is so fancy, it might be one of the nicest rooms I’ve ever been in. And pretty pricey too… but I’m going to try not to worry about that too much. I committed to this way back in September of last year, and I’m going to concentrate on having a great time – and maybe not go next year, so I can save up some money. *shrug*

I saw lots of other fan-type people in the hotel, on the streets, and in the food court when I picked up dinner, but there’s no real events on this morning and I don’t feel like heading out and making new friends. There’ll be lots to do tomorrow, so I should be resting up.

Left yesterday morning at 7am to go to the airport. Flew through Washington briefly, got to Atlanta, took a shared shuttle to the Holiday Inn, checked in and immediately got set to go register at the Convention. By 4 in the afternoon I had my badge – there was almost no line-up for pre-registers by then.

Then I spent several hours running around, getting a good sense of the five host hotels and where they were in relation to each other – at least, I hope it’s a fairly good sense. Dragon*Con is a bit new to me, in that though it’s a bigger con than Fan Expo is, it doesn’t feel exactly like the commercial ‘floor cons’, such as Fan Expo or Wizard World. Instead, it’s a giant version of a fan ‘hotel con’ like Polaris or Ad Astra – hence, why it needs five host hotels, I guess.

I dropped by the Whedonverse fan track room in the middle of a panel about absolute power corrupting in Joss Whedon shows, got bored and went on more exploring, and got four autographed pictures:

I could have gotten autographs from James Marsters and Felicia Day too – but I had left the comics that I want them to sign back at the Holiday Inn! Oh well, try today I guess.
END_OF_DOCUMENT_TOKEN_TO_BE_REPLACED

I’ve been doing a lot of travel planning over the past few weeks, and the anticipation can be almost as much fun as the actual travelling. (It can also be a bit frustrating.)

I’m planning to go to Polaris as well, wouldn’t miss my chance to go and see Adam Baldwin, but haven’t actually booked the ticket or the hotel yet. I’ll need to do that soon, as the online ticket sales deadline is in just a few days.
And I think that when all of that is done, I’ll still have some vacation time left, because my boss confirmed that I qualify for four weeks off this year. Where else should I go – any ideas?

So I got into the CSSF Short fiction workshop – I’ll be spending two weeks in Lawrence, Kansas this summer! I’m really excited, and you’ll definitely be hearing more from me about this.

In other travel and vacation news, I found a vacancy in an Atlanta hotel for Labor day weekend and registered for DragonCon 2011!

Been running around all evening, need to go to bed soon. Blog more tomorrow.

At this point, I have officially been on the waiting list for the Odyssey workshop for nearly a month.

I’d love to get a chance to attend, but it’s been oddly stressful waiting for news. At this point, I think I’d appreciate finding out for sure that I’m not getting in nearly as much as an acceptance, just so that the waiting is over, and I can go ahead and make other plans for my vacation time. Dragoncon 2011 is looking like it would be a lot of fun, and Atlanta area hotels are already booking up for labor day weekend.

And then, in looking for ‘writer’s conferences’, I found some interesting events that look like Odyssey-lite or Clarion-lite; again fairly small events so I wouldn’t necessarily get a spot, but only 1 week or 2 weeks long. Viable Paradise is one that looks really good, and the CSSF Writer’s workshop

There are lots of people who I’d love a chance to get to see at a sci-fi convention or something similar, (Nathan Filion?) but haven’t seen an opportunity so far.