The revised version of “Won’t somebody think of the Children”, the one that I spent nearly sixteen months slaving over, (with a few breaks to work on other projects,) is still working its way through the critters.org critique queue. Chapter 4 got sent out for critiques on Wednesday, and I’ve gotten one full critique back of the entire novel by a dedicated reader and I’m waiting on a few others.

The results certainly haven’t been universally encouraging. I really think that the story is much stronger than it was in the first draft, and I’ve gotten some encouraging validation from some readers, but there have also been a few responses that took some wind from my sails. One of the critiques I got from chapter four said that there was no conflict, nothing at stake; and offered three different rewriting techniques for improving a scene. I was disheartened when I first received that, and then twelve hours later, I got a short commenting on my colon use, with four paragraphs of praise and apologizing for not having more negative feedback. 😉

I guess I’m going to have to organize all my critiques, including the feedback from the dedicated readers who haven’t gotten back to me yet, and evaluate it all like a big pot of soup without paying too much attention to any one piece. And always bear in mind that the first revision I did was based off my own impressions of the book, and there are dozens of tools from the Holly Lisle revision course that I can still turn to and use to fix the problems that I never saw, once a critter has pointed out that they’re there.

It may be a tough job, but a writer’s gotta do it at some point!

Well, once again I’ve been racing to finish critiquing 10 different pieces of writing from the critters.org workshop queue, to earn the award that’s given out every week for “Most Productive Critter.” I like to shoot for an MPC every so often, mostly because the prize is a pass to go directly to the front of the queue of submitted stories, which can come in handy. The usual wait to get something critiqued on critters.org is a month, and I often get impatient when I have something new that I want to get feedback on.

The last time I earned an MPC, I kept the pass in my pocket for months, until I actually used it to see what the critters thought of the opening to “The Gnomes are Missing.” I actually haven’t really gone through all the critiques I got for ‘Gnomes’ yet, but they’re sitting in my gmail, and then I immediately sent ‘Time Bubble Trap’ through to be critiqued. TBT is going to be sent out Wednesday of this week.

And if I get a new MPC this week, I’m going to use it to get the new revision of “Storm Mirror” out next week – so I’ll have critters feedback on all three pieces I’ve been thinking of for workshop applications. Whoo-hoo!

Getting critiques of your own writing is obviously a good way to improve it, but I’ve found that critiquing other writers via critters has also helped me learn a lot. I’ve sortuv developed a sort of a pattern, which helps when I’m trying to get lots of critiques done quickly but still make them as helpful as possible to the authors:

I didn’t do much in terms of coming up with any goals for October Monday or yesterday – for one thing, I wanted to give myself a break after an eleventh-hour drive to finish most of my September projects! I did keep up with some good time-slice stuff, including editing ‘Children’ for style and grace, (Holly Lisle’s revision lesson 18,) and doing some cleaning in my bedroom.

But I’ve been brainstorming for the to-do list this evening, and the list is even longer than usual, which is not necessarily a good idea. But partly inspired by the Goals versus Expectations philosophy, a lot of these are very small, almost baby-steps goals, that I know I can achieve if I put the time in…

So, am I crazy? Which of these goals, if any, do you want to hear more about as I strive to succeed?

Well, now that I’ve finished my Block Revision, I’ve got a bit more time to look at some of the other goals that I set myself for this month. I don’t think I’m in too bad shape, but I’ve got enough to keep me busy until October. 😉

Do you have goals that you’re working on this month? How are they coming along?

The December call to relax.

I’m starting to feel like I’m in dire need of taking a bit more time to relax.

I dove head-first into new projects as soon as Nanowrimo was over this year – the Holly Lisle revision course, outlining ‘Magic Manuscript’, reading and critiquing stories, driving lessons, and so on. That’s all good stuff. But I may want to dial back my December to-do list just a little bit so that I can chill out.

What about you, have you been relaxing lately?

I’m a tired, but productive critter this week

I’ve been reading a lot of pieces and sending in a lot of crits for the critters.org online workshop this week. I decided that I wanted to get a ‘most productive critter’ award, which requires earning a really high number of critique points in a single week for many different stories or chapters, as opposed to a single novel reading.

I’ve sent in 12 critiques since Friday afternoon, for pieces ranging from 400 to 4000 words, and running the gamut from ghost story horror to medieval fantasy to crazy cutting-edge science fiction with people becoming string theory patterns and entering quantum foam.

It’s been kinda fun, and quite a stretch for my critical ‘muscles.’ I’ll hear back tomorrow afternoon on if I got the MPC or not. 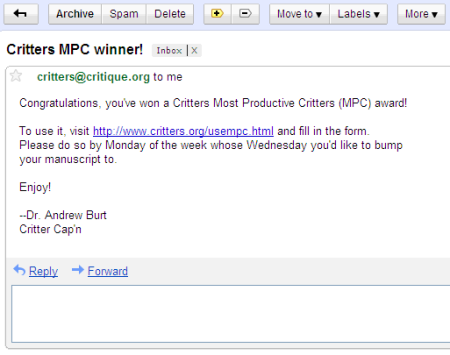 I want to rewrite ‘Harry and Mars’ by June 14th, so that I can incorporate most of the notes I got from critters.org before submitting it for the Kansas workshop. (I’m also planning to do a few more revisions to ‘The Landing’ in the same timeframe.)

Unfortunately, it looks like most of the opinions I got from critters.org are suggesting that the story has some good potential, but some serious issues. When I pull up the appropriate tab of my ‘tracking spreadsheet’, some of the first entries for Harry and Mars include:

Now, to be fair, I sorted the list for items that I felt would require a lot of work to get these ones to the top, but still, there weren’t a lot of ‘quick wins’ and easy changes that I thought would improve the story much.

Like the title character in the story, I do feel a bit as if I’m on the edge of giving into despair and fear. I’ve already done a fairly substantial rewrite on my first draft, and despite the potential that I and other people have seen, I’m not entirely sure if there’s a great story in here that I can tell, or that I really want to tell. Still, I haven’t given up, and I’m going to give it one more try in the next two weeks. Going over all the points from that list, I’ve actually just had an interesting idea for reworking the story – getting rid of Charlie as the POV character, beginning the story with Harry attempting suicide and being stopped, and having three supporting characters each interview her to try and find out why she did it – the doctor, the captain, and Charlie, the best friend.

As tempting as it was to work in the ‘phobia of Phobos’ bit, I think that that was leading me astray too. My first draft wasn’t about a phobia, but about a crewmember on a space flight giving into depression and despair in the midst of a crisis, and I think that may be the better way to go after all. The question of why she suffered from that depression, and how no-one had spotted it earlier, can be the central question that I explore.

Star Patrol to the critters

I didn’t really get a chance to send the Star Patrol blogisodes over to the CSSF as a novel workshop sample – applications to the novel workshop have been closed for two months now. But I had a window of about a day and a half when I was seriously considering that, editing and proofreading the writing that I’d done so far, putting together an outline for the rest of the novel, and now I’m seriously wondering if I can get the entire book written this year.

So I decided to do something a bit new, and send the story so far to the critters workshop, along with the outline, and inviting critiques on that. Part of the way the critters structure works is that there’s very little downside in having something waiting in the queue to be sent out, (or out) all the time, if you actually have stuff that you want opinions on. You’re expected to do your weekly duty of critiques, (whether on the shorter pieces that are sent out weekly, or amortized on longer novel-length manuscripts) whether you have something waiting to be sent out or not.

My second short story for the critters, ‘Harry and Mars’, was sent out last Wednesday and critiques for it are due tomorrow, so I put together the revised Blogisodes, reformatted as chapters 1-2 of a novel manuscript tentatively titled “First Discovery”, and added the brief one-page synopsis of the novel’s plot. I’m not quite sure what kind of feedback I’ll get back from the critters, but hopefully it won’t be hard to wait to find out. It looks like if I’m lucky, I’ll get in at the end of the batch of stories sent out June 1st.

Critter: (noun, dialect.) A reader who undertakes to provide a constructive critique or helpful feedback on behalf of the author of the piece being read.

Critters are great. Critters are indispensable to my writing process, and I suspect that 90% of successful writers have critters of some sort.

Where to find good critters can be a difficult problem. Non-writer friends are often not the best critters, because they don’t always understand what kind of detail is helpful to a writer. Writer friends can make good critters, but not when they’re busy with writing first drafts of their own.

Critter exchanges can be a very good arrangement, or writer’s circles in which the entire group acts as critters for each of the members in turn.

I’ve found some good critter exchanges on the ‘Nano swaps’ forum of the National Novel Writing Month online community, and I’m attend two local writer’s groups that do critiques of pieces that members bring in. I’ve even acted as a critter wrangler for the Stringing Words online forum, organizing their third CritMo (Critter Month) event and pairing up authors with volunteer critters who read their pieces and send in feedback.

Recently, I’ve also joined an amazing online workshop called… (drum roll please,) critters.org, which runs something like the same program on a much larger scale. Here’s how it works, basically:

I’ve almost made it! Less than 4 hours to go in the last 3 weekdays. I can make that easily – even with Hamilton Writers’ meeting and the Script Frenzy kick-off party on my calendar. Hmm…

So here’s the headlines for my editing progress on days 22 through 28:

As usual, I’m rather all over the map, but I think that I’ve gotten some good stuff accomplished.