Fan Expo – Too Many Crowds

I bailed on Fan Expo early today – or maybe I beat a strategic retreat. By a little after 4 I’d done everything I wanted to and still had the opportunity to do today, and I was tired of being in a crowd and the phones not working well. But I didn’t want to go back to my hotel room because there’s a Browncoats shindig downtown in about two hours.

So I’m loitering in the VIA Rail part of Union station nibbling on snacks and enjoying how well the iPhone works without 9000 other phones next to it – until the battery runs out. And I’m thinking about what I accomplished today and the disappointments.

Accomplishments:
Met Alan Tudyk in his autograph line. Got my copy of “Those Left Behind” signed, bringing that comic up to 5 big damn signatures, and 6 for the blueprint book, which has Melinda Clarke too. Alan loved the shiny detail in the blueprints, and he signed over the cockpit on the cover of course. 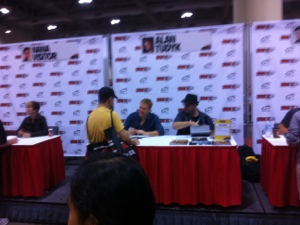 Played a little fragment of a Settlers of Catan game with a nice fellow from the board games room.

Got a pretty good seat for the Lost Girl panel, loved hearing the cast banter back and forth and seeing the blooper reel. END_OF_DOCUMENT_TOKEN_TO_BE_REPLACED

Some of what I’ve been watching lately

I don’t often talk much about television I watch on this blog, partly because the DVR has helped me fall so far behind on a lot of good series… but I thought at this point in the 2011-2012 season, I’d give a few thoughts on some relatively recent shows, even if I’m not up to date on all of it:

After giving this one a chance, I really was hoping that it would make it. There was a very fun vibe to the series, and I liked that each case was either fighting crime that victimized women.

Myself, I almost had the sense that the original series, the Barrymore movies, and this remake were all in the same canon – Charlie Townsend stays the same, but the Angels working for him change – as do the Bosleys.

I’ve watched Supernatural here and there for a while, but never really followed the show – but I decided that I wanted to pick it up for this season, mostly because of the news of some prominent guest stars from the Whedonverse – Jewel Staite, James Marsters and Charisma Carpenter.

Again, it’s been a fun show so far – I’m not hugely wild about the Leviathan as the series-long Big Bads, (if they’re going to be,) but they seem to be working well so far – supernatural spirits with great appetites for blood and remarkable powers to physically blend in among humans, but completely clueless to start about the human world.

END_OF_DOCUMENT_TOKEN_TO_BE_REPLACED

Well, it was all about Eliza Dushku and Lost Girl, it turns out. Not that either has anything to do with the other beyond sharing my time today.

I was in line by 8:45 to get in, and so I arrived at the autograph booths close enough to ten AM to get the number 67 ticket. They’re using a new system of number tickets in addition to the lines for autographs this year, it seems – once the space allocated for the line is full, anyone else has to get a ticket, and they call a certain block of numbers that can come and join the line when there’s room. So once the easel said ‘up to 75’ next to Eliza’s line, I rushed forward to take my place. If you miss the call for your block, you can use your ticket to join the line later.

Got plenty of good stuff, both for myself and for a friend who’s also a big Eliza fan. Then it was up to the Lost Girl panel, which was really cool, because there was so much positive energy in the room – you could tell that the cast loved working on the series, and had a lot of fun together, and there was a huge turnout and everybody in the audience was excited, and the cast was thrilled to see that they had so many fans. After the screening, the cast had a special limited-time signing, so I got a bunch of signed mini-cards. Then it was time to quickly grab a pizza and head up to get my picture taken with Eliza at the ‘photo op.’

After I’d left the photo op room, things kinda got less eventful. The convention center was very crowded by that point in the afternoon; I went to one panel that I thought looked cool, but I was late and it was standing room only, so I didn’t stay. Then another event got cancelled, and I ended up sitting for about an hour and a half in the waiting line for Eliza’s question and answer session, which was pretty cool – I got a good seat and recorded some of it on my camera. And then a dinner shindig with the Toronto Firefly group to round out the day.

So it was a fun time, despite a lot of waiting around. But even the waiting time I put to good use – reading on the iPhone! I finished reading “Prisoner of Azkaban”, read Terry Pratchett’s “The Light Fantastic” through from beginning to end, and started on “The Rock Rats.” The battery went down more than halfway just from all of that reading!

PS: Since I see that somebody was searching for it, the autograph fee for Eliza Dushku was a bit on the pricey side – forty dollars a signature, and fifty for the photo op ticket.