Revision on the brain.

So, I had my first live Revision class for Storywonk yesterday – it was the second class in the course, but I joined late because of the Polaris craziness and caught up on that class with the on-demand replay, which isn’t as fun as being in chat live and getting to answer questions.

But I’ve got all kinds of things running through my head with all the stuff that Lucy’s covered in class so far, and other things that I’m just thinking of because of tangents. I think I’ve got a good idea for the opening scene, but it’s going to be a big rewrite – partly because, as Lucy points out, the opening scene has a lot that it needs to do.

But I’m also starting to think about ‘the trouble’ from the bad guy’s point of view. My antagonist is really resourceful and clever, and when he decides to take a Princess prisoner, he’s not going to do it by sending armed soldiers into the festival. I think I’ve managed to come up with a much more clever scheme that does him justice, involving poisoning and food vans. Now I just need to figure out how to tell it from the POV of my protagonist, and let her stand up for herself just a little but still end up in the really hot water.

I’ve also got a new beat breakdown up on my corkboard – this one is for my current draft of ‘The Long Way Home’: 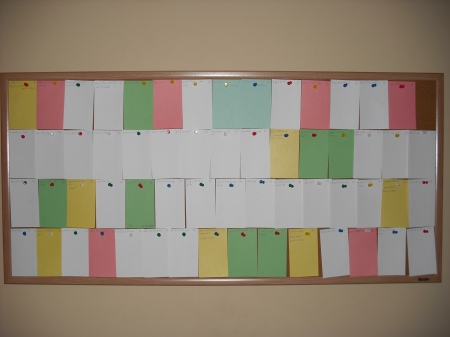 Each card is a scene, with the sequence of scenes in the book going ‘Summer Glau style‘ back and forth from the top left down to the bottom left. Some types of scenes are color coded:

So, I guess I’ll leave it at that for now, except to ask – if you’re not doing revision, then what have you been up to for July?