Okay, it’s been a while since I did a drawing post, which is good, because it means I’ve got a lotta pictures to show you. All of these were ‘negative space drawings’ – a technique where you focus on the empty space around the object that’s actually there – because the logical left side of your brain is bored by empty space and doesn’t know what mental category to bucket it into, so it bugs out and lets the right side draw what it sees – or so the theory goes.

After a little back and forth, I started with an exercise where you draw a chair based on a photograph. The workbook suggested cutting one out of a magazine or newspaper – I used Google Image Search and decided to work with this:

And here’s my negative space version. I toned most of the page with a graphite stick before I started drawing and erased everything but the ‘negative space’ when I was done.

END_OF_DOCUMENT_TOKEN_TO_BE_REPLACED

February is Drawing to a close…

But I’ve still got nearly a week to draw my heart out! 😉

Earlier in the week, I was continuing with observational sketches using the plastic picture plane. I showed you a photograph last time of the picture plane with my hand holding a flash drive. Here’s the final sketch result. My fingers didn’t come out perfect, but I think I’m showing some progress:

Next, I did a still life of an apple with the picture plane, and I went back to toning my drawing paper with the charcoal stick: END_OF_DOCUMENT_TOKEN_TO_BE_REPLACED

Are you sick and tired of seeing my pictures and hearing me ramble on about the right side of the brain yet? I hope not, ’cause here comes some more. 😀

Well, since Saturday, I’ve done quite a bit with some very complicated Contour Drawing exercises. The overall recipe goes something like this:

It’s been very interesting. For the first go-round, I did another marker outline of my hand: 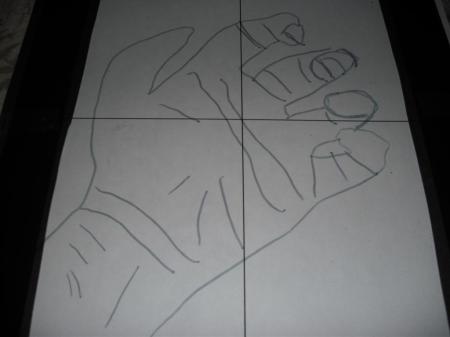 And from that, I made the toned drawing like this:

END_OF_DOCUMENT_TOKEN_TO_BE_REPLACED

Okay, the drawing stuff is still going well, and I hope you’ll enjoy the artistic masterpieces that I can share with you. 😉

When I left off last time, I was in the middle of working through the “Drawing on the Right Side of the Brain” chapter on the development of drawing skill in young children. The section on the landscape drawing stage talks a lot about a typical scene that many children return to draw again and again, and Betty encouraged the reader to remember that picture and draw it again. I’m still not sure if I remember a scene that I actually drew as a child, but after thinking about my childhood and the sort of things that were typically in childhood landscapes, I drew this:

Later in the chapter, Betty talked about the difficulties of moving on to ‘realistic’ drawing and the paradoxes of perspective, with examples about how it’s impossible to draw a recognizable cube with square shapes, because the squares get distorted into other shapes via perspective. (Unless you’re just looking at one face of the cube head on, in which case it’s a square, but you can’t tell that there’s any more to the shape than one square.)

So I wanted to try sketching a cubic die, and several other platonic dice. Luckily I still had a few, though I’ve thrown out most of my collection of RPG dice:

After that, I moved on to a new chapter, full of really interesting and weird drawing assignments. The first one involved tracing the lines on your palm, moving the pencil as you moved your eyes – but you were supposed to keep your head turned away from the paper that you were drawing on, so the results weren’t supposed to be a realistic picture of your palm, just a window into the process. So here’s the ‘drawing’ I made of my palm: END_OF_DOCUMENT_TOKEN_TO_BE_REPLACED

Okay, well, as I finished my last post about drawing, I’d just gotten up to the first upside-down drawing exercise I did, where I copied somebody else’s pencil sketch by turning it upside down and uncovering it a bit at a time. The idea of this, according to Betty Edwards, is to confuse your literate and specific left brain by drawing something that it can’t assign a label to, so that your right brain is free to draw what you actually see.

When I started off February drawing month, I started off with several more upside down drawings. First, one that I think really came out well, was of a horsey: 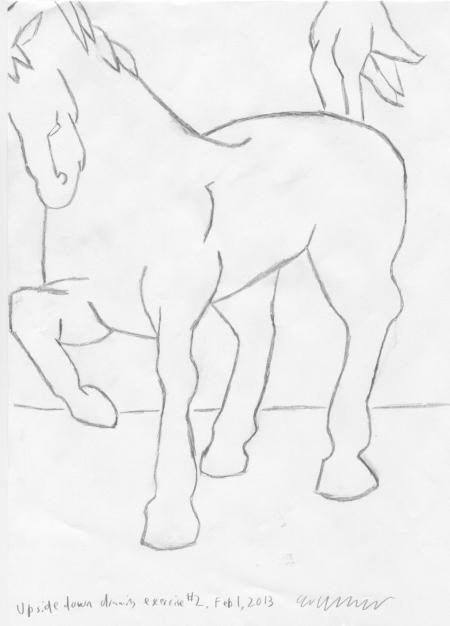 I didn’t mean to have the head and tail go off the edge of the page like that – I’m still having some issues with judging distances, so I ran out of room. Still – nice horsey! The next one was a horse and rider, and I’m not so wild about it: END_OF_DOCUMENT_TOKEN_TO_BE_REPLACED

Catching you up on my drawings

Hey! So, thanks to everybody who commented on the drawings I shared for ISWG this week. I’m going to be showing you a lot more drawings over the next few weeks, because I’m doing a special push for drawing time-slices in February – I even added a special letter A to my Calendar of Goal Tracking for Art – to be used whenever I spend some time reading from ‘Drawing on the Right Side of the Brain’ or do at least one drawing exercise. (I gave myself a very little ‘a’ yesterday because I read about an exercise and then decided that I wasn’t ready for it yet.)

But today, I want to catch you up on some of the work I’ve done on the book before February started. First, two more pre-instruction drawing that I didn’t share last time. The first was a face from memory, which is a very hard thing for even a trained artist to do, according to the book. I tried to draw a friend:

I did the first three pre-instruction drawings in October, the night of the Hamilton Nanowrimo kick-off party. In December, I found one more pre-instruction exercise idea in the workbook that hadn’t been mentioned in the book proper – drawing the corner of a room. I chose the corner of my living room near the TV stand – and immortalized a television and VCR that have since been taken to the recycling depot: END_OF_DOCUMENT_TOKEN_TO_BE_REPLACED

Hey, it’s the first Wednesday of the month, so that means it’s time for the February 2013 edition of Insecure Writers’ Support Group. This time, I’m going to take the opportunity to talk about something that I’ve been learning even though I feel very insecure about it: drawing.

I’ve never felt confident about drawing or painting or much else in the visual arts. When I think of art class back in school, I remember lots of crazy conversations with my friends and classmates, but also a bit of dread as I took my assignments to the teacher to face grading and evaluation. Though I’ve found some satisfaction in doing fanart compositions over the years, those have always seemed very different from original artwork – they were all about finding something that already looked good, measuring and balancing it, as opposed to creating something from a pencil held in my own fingers.

But I was interested in the idea of being able to be good at art, at being able to actually do illustrations for my stories – if not something good enough that I’d want it to be a finished product, then at least being good enough at sketching that I could show an idea I had to another artist who could refine it and make it better. I’m a very visual thinker in a lot of ways, so it was frustrating not being able to express myself in that way as well as I could with words.

I was interested when my brother first mentioned the drawing book he’d gotten a copy of, ‘Drawing on the Right Side of the Brain’, and borrowed it when he gave me a chance to – and promptly did nothing with it, for months on end, until he asked for it back. Partly, I guess I was scared of trying and finding out that I was hopeless.

But I got the book back late last year, put starting it on my October to-do list, and actually felt excited and creative enough after the Nanowrimo kick-off party last year to finally dive in. And – well, I’m still not a good artist, I’d say, but I’m better at certain skills than I thought I was, and I’ve improved in just the few months that I’ve been working on it. If I keep working, I know I’ll keep improving, and who knows where I’ll end up?

I’ll share a few of my earliest drawings today – these are the ‘pre-instruction sketches’ that are supposed to demonstrate how much my skills improve, like the before picture. I guess I’ll be doing ‘after’ drawings once I finish the book. First, a self-portrait that I did in a mirror: END_OF_DOCUMENT_TOKEN_TO_BE_REPLACED

First off – it feels so weird to be posting something other than a six sentence snippet on Sunday! 😉 I’ve signed up for Skye Warren’s New Proposal, which is actually based on a monthly schedule; you can sign up starting from the first Sunday of the month and post your excerpts on the third. We’ll see how that works out. And I’m interested in a few other possibilities, including Weekend Writing Warriors and the Unaffiliated Six Sentence Sunday Facebook Group. But I didn’t get it together to join either of those for this week.

Instead, I wanted to post today about drawing! I’ve been working through Betty Edward’s “Drawing on the Right Side of the Brain” for several months on and off now; a few pre-instruction sketches the last week of October, quite a bit of reading and some drawing in December, and an upside-down drawing every day in February. I’ve put this onto my February goals list, that I want to timeslice some drawing stuff six days a week, (either reading from the book or a drawing exercise, or both,) and added a new letter to my Calendar of Goal Tracking for it; A for Art.

So I want to share some of my drawings with you, faithful friends and followers, and I had a flatbed scanner sitting around on a shelf, one that my Mom didn’t want. So after several days of telling myself that this was the day I scanned pictures for the blog, I finally…