Well, I’m back from spending Christmas day with the family – lunch at my Mom’s Condo, and then presents under the tree, wrapping paper fight, and turkey dinner over at my sister’s house in Kitchener.

Of course, the great joy of Christmas is in the giving, but I’m not that comfortable sharing the list of what I gave to my family and friends here on the blog. Somehow, babbling on about all the loot I got doesn’t seem quite as awkward!

So, did you get any cool gifts?

I’m a big fan of pizza – with meat on it, thanks, and tomato sauce of course, and a nice helping of cheese.

Stuart McLean wrote that the secret to feeling rich beyond your wildest dreams is finding the feeling that you’re getting a deal on something, and slipping into excess with it. For him, it’s picking up 30 pairs of socks at a discount, for some reason. Apparently a freezer stuffed full of pizza does the trick for me.

The Little Caesar’s across the street from my apartment had Customer Appreciation days yesterday and today, so I appreciated five medium pepperoni pies for twenty bucks plus sales tax. One pizza got split into half for yesterday’s dinner and half for this morning’s breakfast, and the others got split up into little plastic bags, three or four slices at a time, and into the freezer. The only thing missing is Canadian bacon. 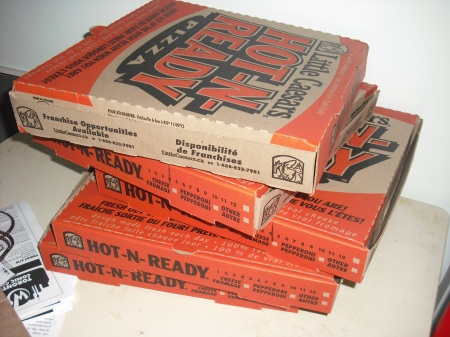 So, dare I ask it… what do you like to put on a pizza? And what makes you feel rich if you buy enough of it?

The socks left behind

This was from a prompt writing exercise at the Hamilton Writer’s group (Chester’s beers of the world,) over a year ago. As always, feedback greatly appreciated.

There’s a wormhole that opens up in the top drawer of the dresser and swallows socks. Nobody knows where it leads, but any sock that goes through that hole in the space-time continuum is never seen or heard from again.

Everybody in the whole dresser knows about it, and even the dress shirts and pants that get put on plastic hangers in the closet have heard the stories as they go through the laundry. New socks, fresh from the store, shake when they first find out, and hope that they’ll be left in the laundry basket after they’re washed and dried, just so that they don’t have to get put away in the top drawer.

But I’m not afraid of the top drawer. That wormhole has already taken everything it can from me. It’s not going to take what’s left of me.

I’m a gray dress sock with black horizontal stripes, and I’ve lived in the top drawer of that dresser for three years.

Sometimes I do dwell on the wormhole, concocting overly elaborate plans to track a fresh white tube sock as it gets sucked away, to find out what’s on the other end, or to implode the wormhole permanently. But I know that that’s all melodramatic nonsense. I’m a sock for god’s sake, and a lone sock at that. There’s nothing I can do against forces of that kind.

Lately, I’m often the one who tells the facts of life in the top drawer to the new purchases. The white briefs snicker as the story is retold – they know that they’re untouchable, although some of them have seen dozens of innocent socks get snatched.

Occasionally a fresh sock, a deep navy blue one perhaps, will ask if there’s any way for a sock to be safe. I know the answer to that, and I’m honest enough to tell them, although that’s the answer that breaks my heart.

“The vortex will never suck away a sock once its mate has already been taken, kid,” I tell them. “What do you think about that?”