But at least it’s a victory, right? 🙂

I had 534 more words to write when I got up this morning, (for my slacker goal of 10k in July,) and I brought the Alphasmart with me on the bus, hoping to get some more of ‘The Aurigae Express’ written. It went pretty well, got up to the word count just as the bus was entering downtown Burlington, read some of ‘My Man Jeeves’, which is pissing me off because half the stories don’t have Jeeves or Wooster–but that’s a different story.

So, the bus got stuck in a bit of traffic on the beach road this afternoon, but I was happy watching an episode of the ‘90210’ reboot on my iPod. After dinner, spent a while pulling together all of the different word count I’d done in July from nearly a dozen different files, and copied it into the validator on campnanowrimo.org 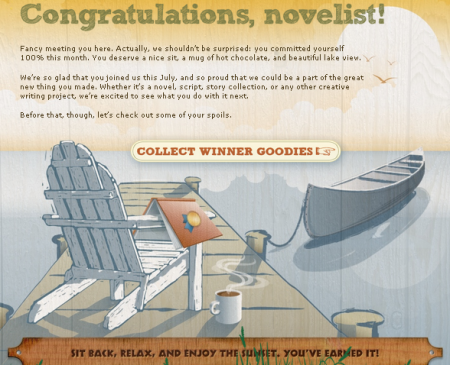 Yay! It looks like I got just the right amount of padding, because the validator took away about a dozen words and left me with exactly ten thousand. So next, of course, I clicked the goodies button, and… 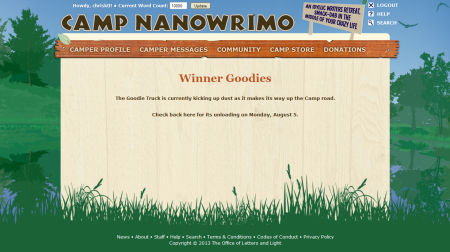 No winner goodies for another week and a half, not even banner images or a PDF winner’s certificate. Le sigh.