What are you writing about this year?
This year I’m working on a novel that will mark a major milestone in my writing career. Not only will there be the challenge of achieving my 50,000 word goal this year, but I’m also challenging myself to finally finish a novel that I’ve been holding off on writing for over 10 years now. It’s titled “This Boy’s Mind” and it is essentially one of the first books that I had the idea for. However, it has always seemed like such a daunting project that I’ve never given it the attention that it requires. Last year I wrote “Nowhere” which at the time was just there, 100% in my head and ready to come out. This year I’m tackling my mountain, and if I succeed, I know it will be huge.

This Boy’s Mind is the story of a boy named Christopher who is propelled into an alternate dimension and meets the Great Birdman, Falgeron. Falgeron informs Chris that the Dark Lord, Veo has commissioned his evil minions against Christopher in an effort to destroy him before Chris can become the Hero described in prophecy. The chief evil pursuing Chris is a giant, undead, possessed wolf named Legion. Meanwhile in the real world, an evil presence has found a way to cross over and begins wreaking havoc on a small Colorado town. The small town Sheriff , Woodfellow T. McElroy and an FBI Agent, Trent Upton must figure out how to stop the creature before it brings about the end of the world.

Where are your backup files, and why?
For the past four years or so, I’ve stored all of my backups at Dropbox.com. Recently, however, I’ve been told by several artists and other authors that Dropbox may not be the best place to be. Something about how the files aren’t encrypted and can be vulnerable, so I’ve begun the task of switching all my files over to the site pCloud.com . I have to report, so far so good. I enjoy having additional data storage space also. Some of my covers can be sorta hefty on the data side.

What advice would you give to all your fellow Wrimos?
Try to keep in mind that Nano is a personal goal. Try to view Nanowrimo for everything else it is and not just a wall of 50,000 words that you have to try to climb. If you don’t achieve the 50K it’s not the end of the world, it doesn’t mean that you’re a bad writer or that you can’t ever be a professional. Trust me, I’m no professional, but I’m one of the slowest writers you’ll meet. I’ve failed to achieve my Nano goal before, but looking back, I know that it was Nanowrimo that propelled me into writing tens of thousands of words for my novel that didn’t exist before. You will not regret the time you devote to your writing this November, use Nano as the tool that it is, try to focus on your project, but ultimately keep it lighthearted and don’t let the 50K keep you from continuing or even from trying.

Sneaky Ninja question! What’s your favorite midnight snack?
Doritos makes a flavor of chip called “Flamas”, and they are crazy good. I don’t know if they’re more of a local thing down here in Texas, or if they’re nation wide. That’s gotta be my go to snack. I like having some wine when I write, but that’s more of a weekend thing. 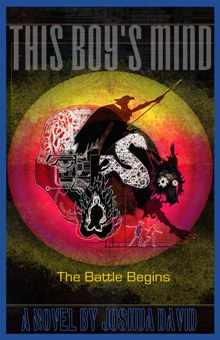 My name is Joshua Ashburn, but I write under the name Joshua David. I’ve been writing since I was about 15, but even before that I was imaginative and liked to read.
Right now, the challenge for my writing is that I don’t have much free time. I have a family ( a wife and four kids), two jobs, various extracurricular activities (cub scouts, soccer, cheer camp, etc…)
Sometimes when I get home I feel so drained that I can’t seem to get any words out. My sacred writing time is on my lunch break at work. I eat quickly and then get about 30-45 uninterrupted free minutes to write. I can generally produce about 500 words a day this way.
Nanowrimo for me isn’t so much about getting the 1667 words per day as it is staying afloat with about 600-800 words per day and then catching up on the weekends.
My project this year is a novel called “This Boy’s Mind”. It is my second major Nanowrimo project. I’ve also done Camp Nanowrimo twice. I keep my readers informed through my Blog: https://joshuadavidblog.wordpress.com/
The main thing I’m looking for right now is honest feedback from my readers. I would love to hear some comments on my blog or reviews on my Amazon page. That’s what I crave as an author…:)

Thanks so much for giving me the interview, Joshua! Wishing you all the best for November!

This entry was posted on Tuesday, October 18th, 2016 at 5:51 pm and is filed under Wrimos. You can follow any responses to this entry through the RSS 2.0 feed. You can leave a response, or trackback from your own site.