In which I try to copy Van Gogh’s perspective…

Hey. It’s been a while since I’ve done anything with drawing, specifically ‘Drawing on the Right Side of the Brain’, but I wanted to at least give it another try now that I’m back from Odyssey, so I pulled out the books last week and tried a drawing exercise Sunday morning. In February I’d gotten up to the chapter on perspective, and there was an example in the workbook where you try to sigh-copy a Van Gogh sketch with perspective in it. So, here’s the original of the Van Gogh:

And here’s my version… 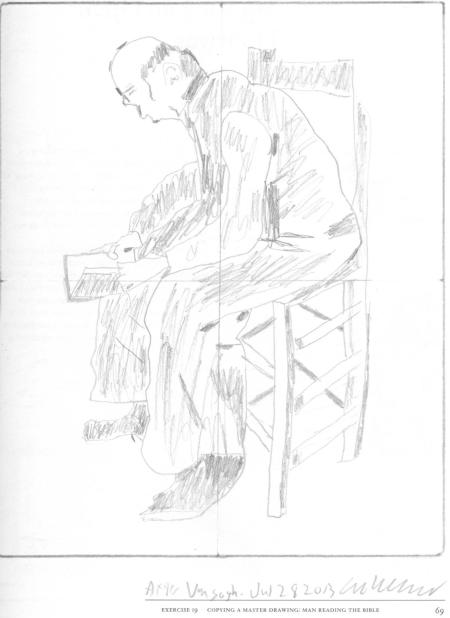 Whatcha think? It kinda looks okay, especially from a distance.

Okay, big news today! Holly Lisle is unveiling the new version of her “How to Revise your Novel” course with a big giveaway. Everybody who enters gets a copy of a free new lesson, “101 Worst Things That Go Wrong in First Draft.”

I’ve learned so much from “How to Revise your Novel”, and I’d recommend it to anybody who has a broken first draft and isn’t really sure how to fix it… especially those of us who’ve survived Nanowrimo and then think “Well, now what?”

And there are lots of other great prizes in the giveaway…

DISCLOSURE: I may receive compensation for some of the recommendations I make on this site. But I’ve taken this course, and I stand by my recommendation for it.

P.S. If you sign up for one of Holly’s courses while you’re there AND you are one of the winners of that course, your payment will be refunded, so don’t worry about waiting until the prizes are announced before signing up for anything that interest you.

Continuing to share the new revision of “Gotta Have That Look,” about teenagers and genetic injections. I’ve shared some from an early draft with Six Sentence Sunday, but this is mostly a new plot. There isn’t much about the novum of teenagers changing their looks in this snip; Jimmy has gone over to talk to his dream girl, Diane.

“I was wondering if you wanted to go with a movie to me–tonight.”

“Thanks so much for asking, but no, I don’t think so.”

“No, thanks–do you mind?” She waved the pencil at her sketch pad. “I’m trying to get this finished before first period.”

Okay so, now that I’ve reached my Camp target for new word count, I’m going to turn around and see if I can manage a revision in a week and change. The Oddfellows of 2013, (my Odyssey graduating class,) have pledged to critique each other’s stuff via email and to have something ready for critique every two weeks, which is a bit of a scary thought, but I’m willing to give it my best try, one story at a time.

The first piece I want to submit for a post-Odyssey critique was actually the last piece I submitted for critique in the workshop, but it was for a private critique with Sheila Williams, so my classmates haven’t seen it yet. Hopefully, before the deadline of the first Monday in August, I can do a decent revision incorporating Sheila’s critique and line edits.

One thing she suggested I change was the title; I wrote the story under the working title of “Tunnel of Love”, and then after being inspired by a stray line of dialog at the end, submitted it as “Frigga’s Masterpiece.” Sheila didn’t think the reference to Frigga in the title worked well, and suggested “Slaved to Love”, but I really want to leave the word ‘masterpiece’ in there. I’m planning to make some changes to make the motif of the masterpiece painting clearer through the story, and I’m thinking of changing the title to “Love is a Masterpiece”, which brings in the thematic element of love more clearly. It’s also now a direct quote out of the song that inspired me, Carolyn Dawn Johnson’s “Masterpiece.”

I’ve been working on a list of other things from Sheila’s critique that I can work on, including:

I think I need to break ground on the revision draft tomorrow, though I can keep working on the plan as I go, instead of just blundering around editing whatever seems best at the moment.

Wish me luck, friends and followers!

But at least it’s a victory, right? 🙂

I had 534 more words to write when I got up this morning, (for my slacker goal of 10k in July,) and I brought the Alphasmart with me on the bus, hoping to get some more of ‘The Aurigae Express’ written. It went pretty well, got up to the word count just as the bus was entering downtown Burlington, read some of ‘My Man Jeeves’, which is pissing me off because half the stories don’t have Jeeves or Wooster–but that’s a different story.

So, the bus got stuck in a bit of traffic on the beach road this afternoon, but I was happy watching an episode of the ‘90210’ reboot on my iPod. After dinner, spent a while pulling together all of the different word count I’d done in July from nearly a dozen different files, and copied it into the validator on campnanowrimo.org

Yay! It looks like I got just the right amount of padding, because the validator took away about a dozen words and left me with exactly ten thousand. So next, of course, I clicked the goodies button, and…

No winner goodies for another week and a half, not even banner images or a PDF winner’s certificate. Le sigh.


Hey there, I’m back from Odyssey, good to see you all!

I haven’t really been doing that well for Camp in July. I set my goal for 10,000 words, and got off to a pretty good start, clocking up over 6600 in the first 8 days. But those were for Odyssey submissions, finishing up “That which was Caesar’s,” (which I started in June,) and writing “Frigga’s Masterpiece” over the first weekend in July. But then Masterpiece was submitted, and I haven’t really been pushing myself to write that much since.

I got a little more written over the last two weeks of Odyssey, and I actually got started on the end of “The Aurigae Express” last night. But I was going to my car this afternoon, pulled out the keychain – and my Camp Nano key fob broke! I don’t even know how it happened, I just pulled the keys out my pocket and what was left of the fob bounced on the pavement. It still looks very pretty, but there’s really no way to put it on a keyring anymore. 😦

It’s the square one that says ’50K’ with the bullseye that I’m talking about, not the round fob with the bird tweeting ‘Nanowrimo.’ Yes, I have an embarrassment of OLL riches and shouldn’t let the loss of one keychain fob get to me so much. But those would be easier words to live by after I’d made my camp word count goal. Sigh.

Continuing to share the new revision of “Gotta Have That Look,” about teenagers and genetic injections. I’ve shared some from an early draft with Six Sentence Sunday, but this is mostly a new plot

Jimmy went, trying to ignore the way his arms tingled. Circles of girls gossiped and an Acro-dancing foursome practiced in the way, so Jimmy walked the long way around the courtyard, and smiled. Diane sketched the statue with a wooden pencil. She still looked perfect; shoulder length brown hair, curves that took his breath away without looking tacky. Jimmy shot one look back to Bryan and Stephanie; he could only see Bryan’s forehead and eyes towering over shorter people, urging him on.

So he walked over to the grape bush. “Hi, Diane. Great weather today, isn’t it?”

Continuing to share the new revision of “Gotta Have That Look,” about teenagers and genetic injections. I’ve shared some from an early draft with Six Sentence Sunday, but this is mostly a new plot

“The guy at Transform-U gave me a new formula with overnight action,” Bryan said. “That’s an exaggeration, but I’m not complaining.”

Stephanie’s voice dropped to a playful purr. “I’ll give you some overnight action, will that shut you up?” Then she cleared her throat and turned to Jimmy. “How’s it going?”

Bryan nodded to Jimmy, and scanned the courtyard from his artificially enhanced altitude. “She’s sitting on the bench by the green grape bush, not talking to anybody, just doodling in her sketch pad; go talk to her!”

Forgive me, friends and followers, for I have lapsed. It has been two weeks since my last post.

What can I say, Odyssey has been crazy. A fun kind of crazy, in places, but definitely crazy. I’ve decided to stop sharing from “The Aurigae Express” and start with the beginning of a story I had critiqued this past week; the new revision of “Gotta Have That Look.” I hope you enjoy it. It’s about teenagers and genetic injections. I’ve shared some from an early draft with Six Sentence Sunday, but this is mostly a new plot

At eight thirty on Monday morning, the teenagers of Hanford, California gathered in the courtyard square of Hanford High to see who had changed most over the weekend. Jimmy swept the crowd hoping to catch a glimpse of Diane, hoping she hadn’t changed a bit.

“Freckles!” Stephanie exclaimed. She wrapped her arms around Bryan and planted kisses on his cheeks. “How did you get them so quickly? You went in for your shots a day and a half ago. Do you feel sore?” She backed away a little and traced one finger over Bryan’s skin, staying away from the red spots.