S is for Sandra Salas

Well, today, I wanted to talk to you about somebody very important to Script Frenzy. Sandra Salas is the Program Director, and this is her second year leading the event.

Sandra is a great director. She does her best to inspire us all with motivational videos and friendly, peppy emails. She’s good at walking the fine line between cheerleading people to donate to Script Frenzy, (the event is free for anybody and relies on donations to keep going from year to year,) without becoming too annoying about it. And, of course, I’m sure that there’s a lot of stuff that she does to keep the event going that I don’t see because it happens behind the scenes.

What with all of that, Sandra is working hard on her script, but she’s a bit behind. Good luck, Sandra!

Q is for Quick Tips

Hi, everybody, how’s it going?

I’ve got another article from the Script Frenzy writer’s resources to link you to tonight – Quick Tips on Shorts. 🙂 I’m not doing a short film, myself – but some of these tips look like they’d be good for short stories too!

O is for Other Genres and Script Formats

Script Frenzy is an event that welcomes outsiders and outliers. So, along with all of the discussion forums dedicated to particular genres and script formats, there are gathering places for those who don’t quite fit in with the established categories. If your script project defies categorization, you might well be at home here.

Over in ‘Other Scripts’, I noticed that somebody is apparently scripting a documentary, as well as plans underway for a long-form soap opera, and video games. And there’s Markus, who was kind enough to answer my question about his series of comedy sketches.

“My script is coming along nicely right now,” Markus wrote. “It is difficult being funny in small doses, but having written movie scripts, I know that a longer script is difficult as well. It depends a lot on the sketch, but a fake commercial isn’t difficult, because really, there’s only one joke. But with a more in-depth sketch, it requires multiple jokes to keep the sketch flowing. Even harder than that is effectively establishing the characters, having a beginning, middle, and end, as well as a flowing plot in such a short time.”

Good luck, Markus, and all the other Script Frenzy outsiders!

N is for Notifications…

There are a few different ways the Script Frenzy website can send you notifications about what’s going on. A lot of them can be managed through the ‘Edit My Notifications’ page, in the ‘My Script Frenzy’ menu. 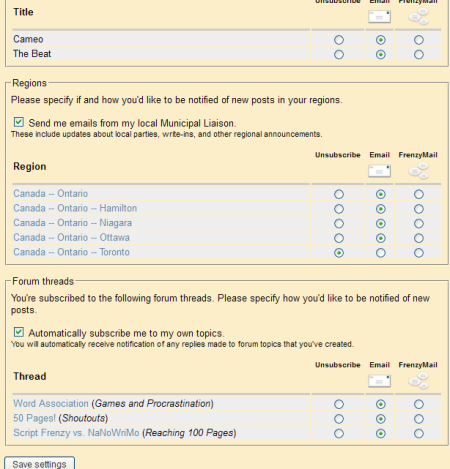 You can choose to be notified by Email of the on-site FrenzyMail system about new bulletins or new articles posted on the site, about anything new that’s happening in any of the Regional Lounges that you’re connected to, or discussion threads on the forums. Subscribing to notifications for discussion threads can be done two ways. One is to check off the box in your Notification settings that automatically subscribes you to any threads you start.

END_OF_DOCUMENT_TOKEN_TO_BE_REPLACED

M is for Municipal Liaisons

I have to walk a fine line in this post between tooting my own horn and admitting that I suck. 😉 For I am one of the few, the somewhat mighty, Script Frenzy Municipal Liaisons.

A Municipal Liaison is a local Script Frenzy facilitator to help encourage participants in the same city or region to come together and meet with local events – like social parties for the start, middle, and end of the month, or weekly ‘write-ins’ where everybody brings their laptop to a coffee shop and pound out a few pages together.

I haven’t actually done that much as a Municipal Liaison. I’ve welcomed everybody to the online forum and tried to moderate the discussion there as much as moderation was needed. I reached out to a neighboring region that doesn’t have an ML this year, and tried to keep an eye on them and help out. I threw a ‘Kick-off’ party for my own region on March 31st, at a favorite coffee shop – and nobody else showed up, as I suspected that they might.

The thing is, there’s only half a dozen or so writers in my region this year, and a lot of them are teenagers who can’t make it out to events, or otherwise aren’t interested. And – well, I’ve been busy with a few other things myself, such as the blog, and getting ready for Wizard World Toronto. I’ve been encouraging people to suggest good times and places for events, but nobody else has spoken up, and I don’t really want to declare an event all by myself and be alone again.

It looks like Script Frenzy is having trouble finding MLs in Ontario – as far as I can tell, there are only four of us on duty – there’s also two in Toronto and one in Ottawa. I hope that more people volunteer next year, because they’re a key part of the event, a personal touch that nobody else can quite match.

L is for Love…

Well, I’ve got another article from the Script Frenzy archive to share with you, and this is one that’s really going to come in handy for me as I navigate the increasingly weird love life of my Jedi-wannabe main character.

The Top Five Reasons to Show Your Story Some Love, by Lauren Gunderson. My favorite bit is the tip about letting good characterization guide your love story and take it someplace unexpected.

K is for Know your Story.

Good morning, all. I just have one Script Frenzy article to share with you today – Know your Story.

This little word of advice comes from Greg Marcks, and it’s about outlining – which I’m not doing that much of myself this year, but Greg makes a good case that putting in planning time before starting page 1 of your screenplay can save you problems down the road.

Today’s topic might be a little stretch, but it was inspired by the blurb for the ‘Plot Doctoring’ forum on the Script Frenzy message board, which reads…

Written your way into a corner? Dangerously close to making the whole story “just a dream”? Our script surgeons can help.

So I ended up starting a discussion thread in the forum to ask people what they thought about ‘Just a Dream’ endings:

Nymue: “There’s a reason people try to avoid that kind of ending. It’s usually trite and dissatisfying. It suggests there’s no internal order to adhere to, the story doesn’t have to mean anything and the events don’t matter… It’d take a lot of creative deconstruction to make this kind of plot worth the time of day. Myself, I’d rather work on things that (at least in the story) definitely happen.”

Quandtuniverse: “I’ve never done it myself, but I don’t mind “all just a dream” endings as long as there’s foreshadowing and a strong, creative reason for it (like, a subconscious character exploration or something). If it’s tacked on just to make up for things that don’t make sense, then it’s boring and annoying.”

JoshMcD: “I think the reason “Mirrormask” is able to get away with it — and for that matter, the reason “Wizard of Oz” gets away with it too — is because the dream does lead the character through a sort of coming-of-age, emotional journey. Instead of ending with an, “it was a dream, oh well, just forget about it,” the story contained within the dream actually helps the MC learn to deal with difficulties in her “real-life”. Also, the story-within-the-dream actually does come to a satisfying conclusion. These movies don’t use the “just a dream” as a cop-out, to escape an otherwise unsatisfying ending.”

I think I agree that it’s generally a bad and cheap technique, but can be used well if it’s done with purpose and care. I wrote a Buffy fanfic as part of a series once where nearly everything that happened in the story was a dream spell, and there were hints to that from the beginning. Partly, it was a fun way to kill off most of the main characters without having to deal with the consequences of them being permanently dead. It also foreshadowed some interesting things about the series’ Big Bad, who had cast the dream spell on Buffy just to watch and see how she reacted to a stressful situation.

I is for Introductions…

Probably the best articles available on the Script Frenzy website are the various introductions to different kinds of scripts. I know that the Introduction to Screenwriting article was a great help to me the first time I wrote a screenplay for Script Frenzy. From what I’ve seen, the others are just as good:

What was your introduction to writing, or blogging?

E is for Evocative words.

Script Frenzy publishes a lot of ‘Cameo’ articles that might be of use to participants, especially to beginner script writers. One of my favorite Cameos is Reach for the Evocative Word, by Lisa Dostrova. And yes, she’s mostly talking about dialog. 🙂 So go and give the article a look.