WordPress 3.4 is a little less than it should be… but they fixed it!

I ran into an unexpected hurdle yesterday as I published my blog post, because the Dashboard page that I use to compose a new post had changed. Usually, there’s the Dashboard menu on the left side of the screen, the textbox where I type my words for you in the middle, and a handy column of control ‘modules’ on the right, where I push the big button to post the entry, preview it, schedule it, and where I enter the tags and categories for the post. 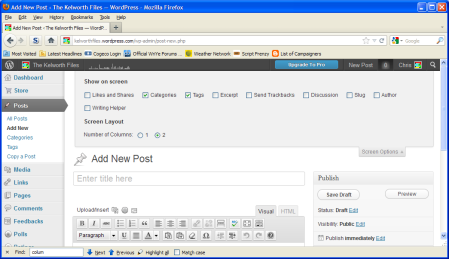 Now, when I write a post on my netbook, the text entry area stretches all the way to the right edge of the screen, and so does every other module. It’s really annoying, as the netbook screen isn’t very high, and so I have to scroll up and down to go from the text to the tags, or anything like that.

After a full day of struggling with support, it turns out that this is due to an ‘enhancement’ in wordpress 3.4, which just came to wordpress.com yesterday. Apparently, the enhancement is to ‘determine the optimum number of columns’ on a device basis – originally meant for devices like tablets and phones, and then extended to narrow browser windows on desktops. Anything equal to or less than 1024 pixels, apparently, is a narrow browser window.

I’m not opposed to wordpress becoming more responsive to the kinds of devices that users are connecting to it on. But considering that one of their common taglines is “limited only by your imagination”, and the stress that they put on being customizable and extensible, limiting a user’s choice in this way is an egregious oversight. For me, the optimum number of columns on a 1024 pixel wide screen, or even an 850 pixel wide browser window, would be two; I don’t mind you prompting me once to try the one-column layout, but let me change it back!

I’ve become a little disillusioned with wordpress before, but this is a serious blow to my confidence in the platform. I’m not going to do anything hasty with the A to Z challenge coming up – I can tough it through April on one column, (or use computers where I can get the resolution above 1024 pixels.) If nothing’s changed by then – well, I’ve been thinking about giving blogspot a try for a little while now…

UPDATE! Aroung 5pm EDT on Saturday the 31st, somebody managed to tweak  the minimum browser width for 2-column layout down to 850 pixels, which they say is ‘the point where the editor breaks anyway.’ I won’t object to that – now I’ve got two-column back on my netbook!

This entry was posted on Friday, March 30th, 2012 at 8:56 pm and is filed under About. You can follow any responses to this entry through the RSS 2.0 feed. You can leave a response, or trackback from your own site.

4 Responses to WordPress 3.4 is a little less than it should be… but they fixed it!