Well, I’ve been indulging in some geeky stuff lately, so I thought I’d share just a bit of it with you.

Droid grocery list update. Had a breakthrough since the last time I mentioned this – I think I talked about the approach of trying to take the App Studio iMenu control, taking away its absolute position, and putting it inside a classic HTML table layout. This turned out to be easier than I thought – the iMenu control doesn’t have absolute position hard-wired into it, it’s just a couple of css directives. I love my new droid grocery list and have been using it instead of the iPhone version ever since: 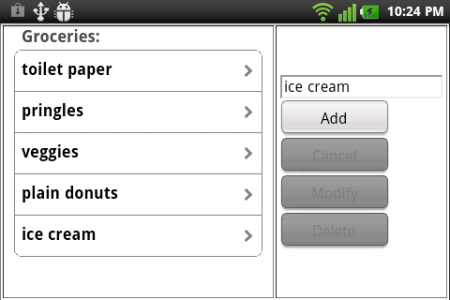 I’m looking forward to doing something else with this hybrid approach to developing for Droid, but not just yet. Part of the problem is that the Eclypse’s keyboard isn’t as spiffy as it looks. It’s great for text entry, but there’s no navigation buttons, so you still have to tap on the screen to work with the GUI. Very quiet sigh.

My new geek project has to do with my old Toshiba Satellite M70 notebook computer that I got back in 2006; soon after I started doing Nanowriye writing. It’s been bogging down more and more, and I’ve been using the Acer Aspire One notebook more and more as an everyday around-the-house laptop, but I didn’t want to consign the Satellite to tech oblivion, especially since it has a few good features – great big comfy keyboard, wide bright screen, S-video out port. On the con side, the hard drive is none too roomy, (58 gigs,) the onboard RAM is limited to 512 megs, and 1.6 gigahertz Intel CPU.

So, I’d been thinking about what I wanted to do with it. I copied all the important personal data off the hard drive, figuring that I’d want to pave over the hard drive and reinstall something fresh, be careful about installing anything that could slow it down. I wasn’t quite sure if I wanted to stick with windows XP or try Xubuntu.

And then inspiration hit – I’d try both! Dual-boot that puppy.

Getting started was the hardest part. I found the Toshiba restore DVD, and spent hours fooling around with USB sticks and BIOS settings because I thought the optical drive wasn’t up to booting off. And the BIOS was somehow stuck in some weird display mode that showed up neither on the attached LCD or the S-video out. (I’m wondering if my S-video cable might need to get replaced, actually.) Once I got the display stuff sorted out, it became clear that the BIOS wouldn’t support booting off USB – even after I tried a BIOS update, which made it almost impossible to hit the setup key in time. But booting off the optical drive didn’t turn out to be a problem.

I’ve got the basic Ubuntu install done, though I’ll need to go and upload patches and software updates to both OSes soon. The hard drive is partitioned more or less like this:

The Droid Groceries saga so far…

Warning, this post gets kinda geeky and technical in places. 🙂

I shared with you guys a few details about my first few forays into iPhone programming with NS Basic App Studio. It looks like I never told you about my favorite iPhone ‘app’ that I made myself: a simple grocery list program that I use all the time. There are other to-do lists and grocery story management apps available for free, but I love this one because it’s streamlined to exactly what I need – it’s easy to add new things to the list, and to mark them off when I’m shopping.

A few months back, I got a Droid LG Eclypse from work, to replace the ancient Blackberry I was issued years and years ago. NSBasic App Studio is supposed to work with all versions of Droid as well, so I was excited to get the Grocery app working on the Eclypse. This didn’t turn out to be so easy. The screen is slightly smaller, and I really wanted to be able to use the slide-out keyboard when typing into the list, which means showing the screen in landscape view. So I played around with a few different layouts, and thought I had a version that would work great in portrait view. Here’s what it looked like in Chrome on my desktop: END_OF_DOCUMENT_TOKEN_TO_BE_REPLACED

It’s Victoria Day today, and the long weekend is informally known in parts of Ontario as ‘May two-four’, as the holiday falls on the Monday on or before May twenty-fourth. To me, the May long weekend has marked the start of summertime for a long while.

This weekend, I’ve had a fairly quiet weekend, sticking close to home, partly because of work stuff – we were asked to keep an eye on our email in case there were support requests from customers in the states, and my brand-new Droid work phone isn’t admitting that it has a data plan yet, so I can only check email over wi-fi. Sigh.

But it’s been a good weekend anyway – I met up with Elizabeth Twist for a coffeeshop write-in yesterday, drove around last night in a somewhat ill-fated attempt to find a parking place for the fireworks show, and I’m heading over to visit with my Mom later this afternoon. I also got some cooking done, storing away leftovers for next week and possibly longer, and finally started serious work on my new revision of my ‘Father Ismay’ story. The hobgoblins are going to get changed into wolf people, for one thing.

So, what were you up to on the weekend? If you’re in the US, do you have big plans for Memorial Day?